← Back to Main Page

Go back to the page earlier for links to view current status of active translations.

These are projects that had stopped community translations and moved unto professional translation instead. We do not have any chance of adding or editing translations of the project anymore.

Discord was a chat platform for gamers and developers. Discord has had major rebranding and it is now a voice over internet protocol (VoIP), instant messaging and digital distribution platform designed for creating communities, not specific to gamers or developers anymore.

Requested addition of Rumi Malay on 6th January 2018, 05:00 AM on Crowdin via direct message to one of the localization manager that is known as Dabbit_Prime, in which I was replied the same day on 07:38 AM with “When we get enough requests to start a new language I’ll let you know!”. Malay was not added, and on January 2019, Discord has stopped community-based translation altogether, and moved on to paid translation with unknown company. Malay is still not available on the app as of 31 July 2021.

Screenshot of the old conversation is attached below: 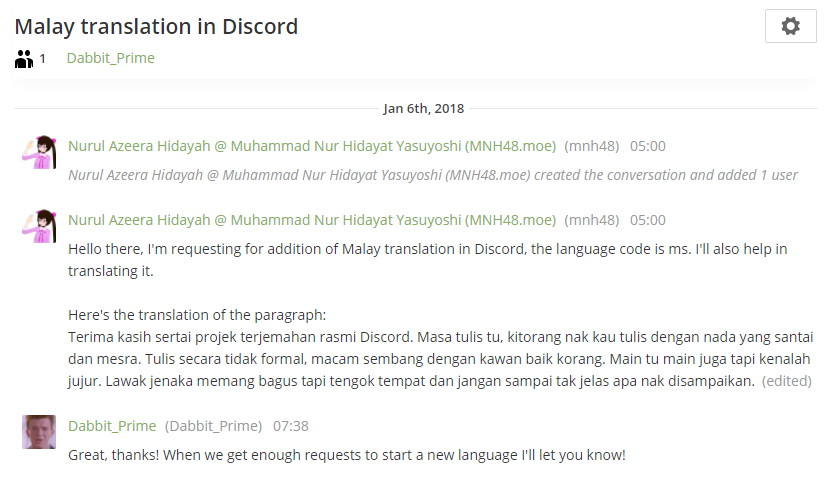 Tatsumaki - a Discord bot was an interactive bot with virtual currency, mainly used by servers as a tool to measure user activity. It has had major rewrite and had been renamed as Tatsu.

The works for Rumi Malay translation for Tatsumaki started on 13 March 2018 and has been completed after a few months, and has since been kept up to date on Transifex side. However, they had a major rewrite and they discontinued the translation on Transifex because of that.

Tatsumaki had been renamed to just Tatsu, and they are making a self-host instance of Weblate for translation after the major rewrite because of the flexibility of that platform compared to Transifex, but as of 31 July 2021, the new Tatsu version is not ready for translation yet and the Weblate interface is still empty.

These are projects where translations has been started but had to be paused for any reasons. Translation will be resumed at a later date.

Xonotic is a free and open-source first-person shooter video game. It was developed as a fork of Nexuiz, following controversy surrounding the game’s development. The game runs on a heavily modified version of the Quake engine known as the DarkPlaces engine. Xonotic uses Transifex for translation management.

The works for Rumi Malay translation for Xonotic has started on 18 May 2018. It was paused because some of the strings required the understanding of the game mechanics for proper translation, and I did not finish playing it yet.

These are projects where the addition of Malay has been requested but has not been approved. Translations will start once the language got added into the tool/platform language list.

GitLab is a web-based development operation lifecycle tool. It has a Git repository manager with discussion function in the form of issues, wiki for instructions, continuous integration and deployment pipeline for automation. There are both paid and free open source versions available. GitLab uses Crowdin for translation management.

Requested addition of Rumi Malay on 14 September 2020 on the Crowdin discussion thread. The thread was marked as ‘Albanian’ because it was created during the time where language selection is made mandatory but Malay does not exist in the project’s language list, and ‘Albanian’ is the first language on list.

These are projects that I’m keeping my eyes on but did not decide whether I will translate or not yet.

I’m keeping my eye on this but not taking part in translation yet because a lot of the terms need further discussion with local authority to avoid misspelling or misrepresentation, especially since these touched upon the international standard itself.

These are projects that I have considered to translate but did not start yet, mostly because other projects had higher priority and that these project would need dedicated time and resource to fully translate properly.

LibreOffice uses their own instance of Weblate for translation management, namely TDF Weblate. I’m keeping my eye on this but not taking part in translation yet because the amount of work is huge in volume and it might interfere with my other translation works.

Current status (all in Rumi Malay):